The Archer Group’s research is rooted in nanoscale materials. We investigate how these materials behave at the fundamental level, as well as apply them to electrochemical energy storage (batteries). The materials we study most extensively are called Nanoscale Organic Hybrid Materials (NOHMs), which are created by attaching polymers to the surfaces of nanoparticles. Depending on the specific polymer and nanoparticle core used, NOHMs can be made to behave like a runny gel, a wax, or anything in between. If an ionic polymer is used, the NOHMs can serve as an effective electrolyte for batteries. 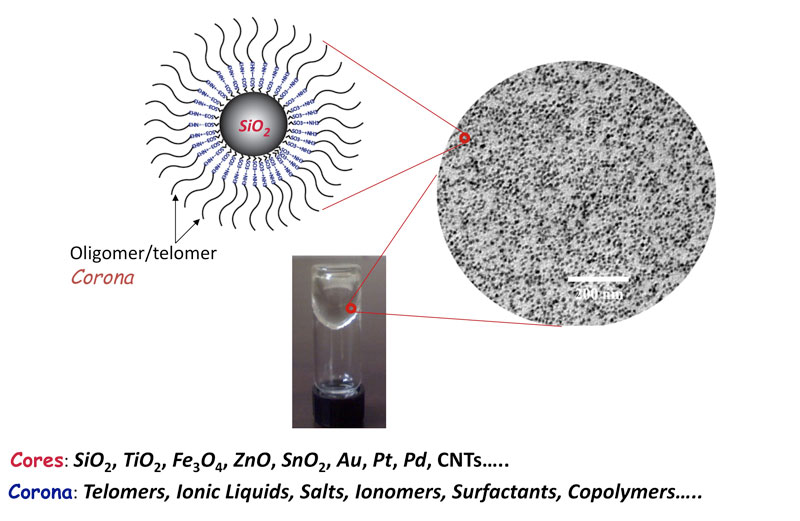 Polymer-particle composites are used in virtually every field of technology. When the particles approach nanometer dimensions, large interfacial regions are created in their polymer hosts, which present opportunities and challenges for basic science research and for applications. In favorable situations, both the size and spatial distribution of these interfaces can be controlled to create new hybrid materials with physical and transport properties inaccessible in their pure constituents or in their poorly prepared mixtures.

The Archer Group studies structure, dynamics, phase behavior, and ion transport in model nanoparticle hybrid materials. Created by densely grafting short organic polymer chains or ionic liquids to inorganic nanostructures, these so-called Nanoscale Organic Hybrid Materials (NOHMs, see figure) are the first example of a polymer-particle composite in which each and every building block is itself a nanoscale hybrid material. By analogy to materials systems developed using atomic building blocks, our studies of NOHMs interactions, thermodynamics, assembly, and properties are opening new vistas in materials synthesis, condensed matter science, and for applications. Our ongoing studies show that by simple changes in the geometric and steric characteristics of the inorganic nanoparticle core and the tethered organic polymer corona, physical properties of NOHMs can be manipulated in unprecedented ways. By capitalizing upon the availability of vast libraries of possible chemistries, sizes, and topologies for the inorganic nanoparticle core and organic corona, students in the group are developing materials that form novel self-suspended suspensions in the absence of a solvent and highly filled polymer-particle composites where particles percolate to create interconnected functional networks that enable novel battery electrolyte and electrode configurations. 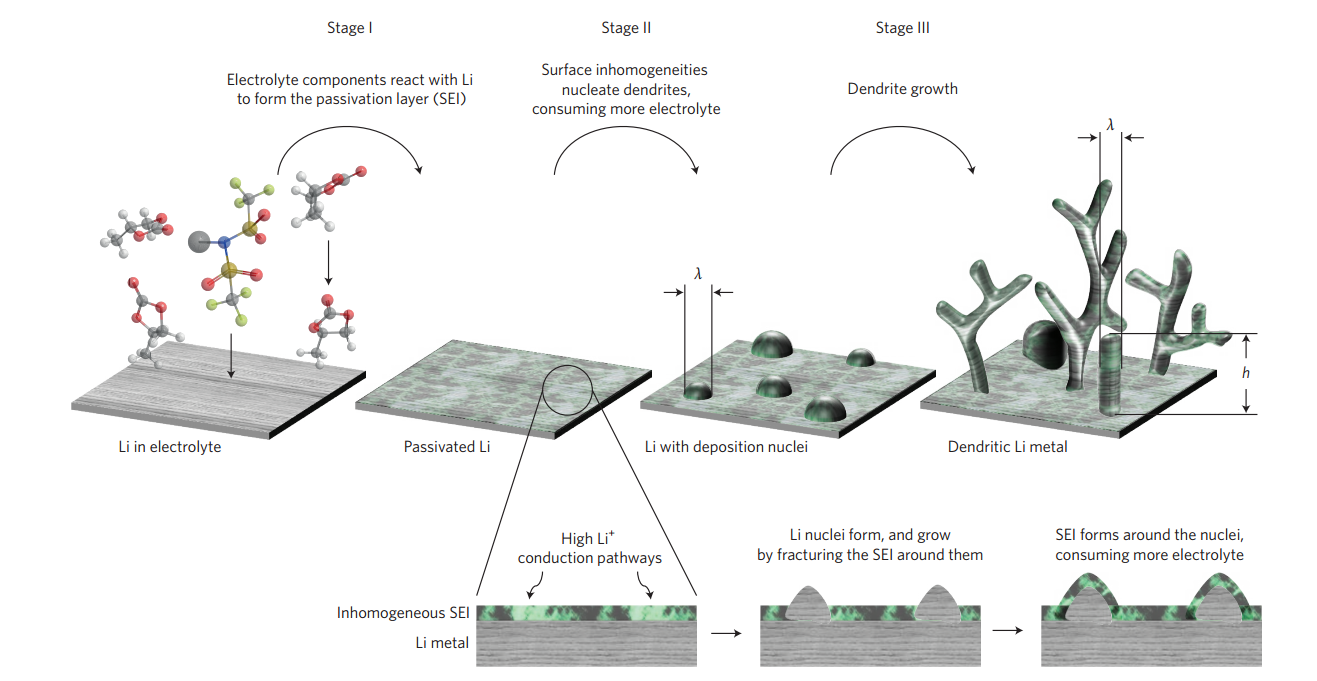 Electrodeposition is used in various manufacturing processes for creating metal, colloid, and polymer coatings on conductive substrates. The process also plays an important role in electrochemical storage technologies based on rechargeable batteries, where it must be carefully managed to facilitate stable and safe operations at low operating temperatures, high rates, and over many cycles of charge and discharge. A successful electrodeposition processes requires fast transport of charged species (e.g. ions, particles, & polymers) and stable redox reactions at liquid-solid interfaces. This talk considers the stability of electrodeposition of reactive metals on planar electrodes with an emphasis on its role in enabling next-generation batteries in which metallic lithium or sodium serves as the electrode. Such batteries have been argued to offer step-change improvements in electrochemical storage technology over todays’s state-of-the art lithium ion batteries and are under active investigation worldwide for high-energy, portable energy storage solutions in multiple fields.

The Archer group studies the ion transport processes and stability of electrodeposition in a so-called structured electrolyte, with carefully desgined strategies for rationally configurating electrolytes and electyrtochemical interphases for stabilizing deposition of reactive metals (Li, Na, Al, Mg, etc.). The stablized metals are subject to evaluations using electrochemical and visualization studies. We also focus on the high energy battery systems based on protected and stablized metallic anodes, structured electrolyte, and next-generation cathodes including various sulfur and air/oxygen based cathodes.

The metal/air electrochemical cell has been proposed as a novel approach to capturing CO2 from mixed CO2/O2 gas streams, particularly using metallic Li, Na, and Mg anodes of high-energy densities, while generating electrical energy. An important finding from these studies is that the presence of O2 is important to enable the chemical reduction and thereby capture of CO2. These metal/O2-CO2 electrochemical capture systems may be operated in either secondary (rechargeable) or primary (nonrechargeable) configurations. In a secondary cell, reduced CO2 species react with oxidized metal ions to form the metal carbonate or bicarbonate and electricity during cell discharge. Recharging the cell would ideally reverse the reaction, consuming electrical energy to release the captured CO2 and O2and regenerate the metal anode. Adoption of these secondary electrochemical systems in a CCUS process would therefore facilitate separation and concentration of CO2, as demonstrated in Fig. 1A. Another configuration of interest is the primary electrochemical cell, where the metal anode is consumed to produce electrical energy and discharge products, which can be harvested (from the electrode, electrolyte, and other cell components) and regenerated to concentrate the CO2 or converted to valuable chemicals if the discharge forms Cn (n ≥ 2) products.